It's better to evoke a strong reaction, positive or negative, than none at all. The 2020 Hyundai Sonata certainly follows this mantra, immediately setting the stage with unique styling that's sure to garner a reaction. But the Sonata is no mere one-trick pony -- instead, Hyundai's assembled a whole-ass package that oozes value and immediately pushes this new car to the top of its segment.

Funky outside, fancy inside

First impressions matter, which is why the Sonata's styling will either make or break it. It's hard not to have an opinion on the way the 2020 Sonata looks, but I'm of the belief that it looks pretty awesome. Bearing a resemblance to absolutely nothing else on the road, especially with my tester's Glowing Yellow hue, the car turns heads and begs questions from other drivers like no other midsize sedan I've reviewed.

Even if you disagree with the fish-face grille, there are so many cool little elements here. The LED running lights literally blend into the chrome strip that runs nearly the whole length of the car. The shoulder line gets sharper as it heads rearward, terminating at a dramatic rear end with little vortex generators on the taillights. The new Sonata hearkens back to a time when Hyundai placed a lot of weight on stand-out aesthetics, and I think this formula absolutely has the chance to strike gold twice.

While the outside is a love-it-or-list-it affair, the interior should appeal to buyers of all shapes and sizes. Here, the design is a little more sedate, opting for clean lines and shiny surfaces that feel like they'd be at home in any number of luxury cars. My SEL Plus tester's leather seats are smooth and supportive, and nearly every touch point up front feels fancy.

Despite the stylish cut in the Sonata's roofline, there's ample headroom in the rear, and legroom is more than sufficient for taller passengers. The trunk is equally capacious, and its wide opening makes stuff-shoving an absolute breeze. If that's not enough room for your junk, the center armrest has space for a decently sized purse, the door panels will handle plenty of crumpled-up receipts and the cubby ahead of the shifter is more than big enough for keys, phones and wallets. 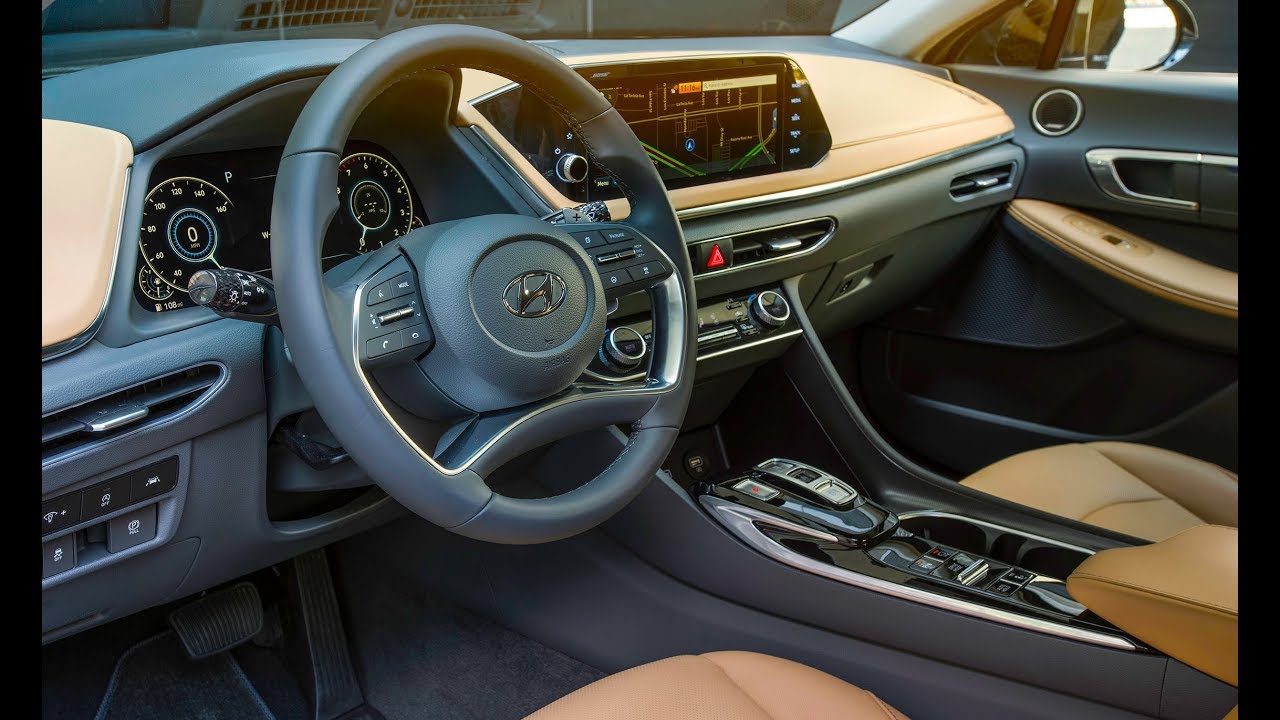 My only real complaint about the interior isn't unique to the Sonata. My tester's piano-black trim might look slick when it's clean, but hoo boy, it will pick up (and dramatically highlight) fingerprints like no other material. Unless you like that greasy look, I recommend keeping a cloth handy.

Cool and collected on the road

The Sonata's two biggest competitors, the Honda Accord and Toyota Camry, have both entered new generations with newfound dynamics that make each car more rewarding to drive in a spirited manner. The Sonata's been upgraded in this way, too, but having fun is not this car's focus -- until the Sonata N-Line shows up, anyway.

Instead, this sedan does a great job appealing to buyers who want something predictable and comfortable. The Sonata's new chassis does exhibit some more stiffness than previous iterations, but it doesn't come off as sporty. Static dampers soak up a good amount of the road's nastiness, only really transferring the most serious of movements to the cabin. Both road and wind noise are delightfully low, too, giving the car a slightly more luxurious feel than, say, a comparably equipped Accord.

That focus on sensible comfort makes its way to other parts of the car, too. The steering is suitably direct, with a lighter overall weight that prioritizes smooth inputs. The brake pedal is progressive enough to make smooth stops easy to execute. A standard eight-speed automatic transmission swaps cogs effortlessly with little feel translated to those inside.

While many Sonatas will make do with the standard 2.5-liter inline-4 gas engine, my SEL Plus tester rocks the 1.6-liter turbocharged I4 found on higher trims. 180 horsepower and 195 pound-feet of torque isn't exactly world-changing, especially when more expensive trims of Accord and Camry are pushing out between 250 and 300 hp, but the Sonata's torque arrives nice and low in the rev range, and I think most buyers will find its motive force more than sufficient.

The Sonata's output might be low, but its fuel economy is pretty impressive. The EPA rates the Sonata SEL Plus at 27 mpg in the city and 36 mpg on the highway. While I was closer to 23 mpg in the city, I'm beating the highway estimate by 1 or 2 mpg. Those figures are good, but they lag behind the 2.5-liter Camry and the 1.5-liter Accord.

In gross winter weather, the Sonata doesn't lose much of its composure, but I think a change of tires will do a world of good here. The standard 235/45R18 Michelin Primacy Tour all-season tires aren't that great on snow or ice, causing the clunky traction control to kick in frequently. All-wheel drive is not available, but with the right rubber, you should feel plenty secure with this front-driver.

I have long been a fan of Hyundai's in-car tech, and the 2020 Sonata only reinforces my beliefs, in part because of its notable complement of standard equipment. An 8-inch touchscreen is included on all Sonatas, which is great, because I find Hyundai's system to be one of the best, offering easy access to major features and laying out information in a straightforward fashion. Apple CarPlay and Android Auto are standard, too, in the event you'd rather use what's most familiar.

My tester one-ups the de facto kit with not one, but two screens. The touchscreen on the dashboard grows to 10.25 inches, part of a $2,750 Tech Package upgrade, and I'm a huge fan of its configurable home screen that all but eliminates the need to swap between map and audio pages. This SEL Plus trim also sports a 12.3-inch display in the gauge cluster. Switching between vehicle modes introduces some cute graphics, but more importantly, it shows all the pertinent vehicle info I need with minimal distraction.

No matter where depleted batteries are in the Sonata, there's a port for 'em. My tester carries two USB ports in the front cubby, in addition to a Qi wireless charger. The rear seats make do with a single charger, but hey, it's better than nothing.

Nearly every one of the Sonata's myriad safety systems are included on every trim, covering automatic emergency braking, lane-keeping assist and adaptive cruise control. The optional Tech Package improves upon that kit with Highway Drive Assist, which combines all the aforementioned tech and holds the vehicle in its lane on the highway. HDA is quite good at maintaining its position on the road, but the steering rack's constant adjustments are felt rather prominently through the wheel, which will feel weird to drivers who aren't used to it. The hands-on system could stand to notify drivers to keep their hands on the wheel more often, too. 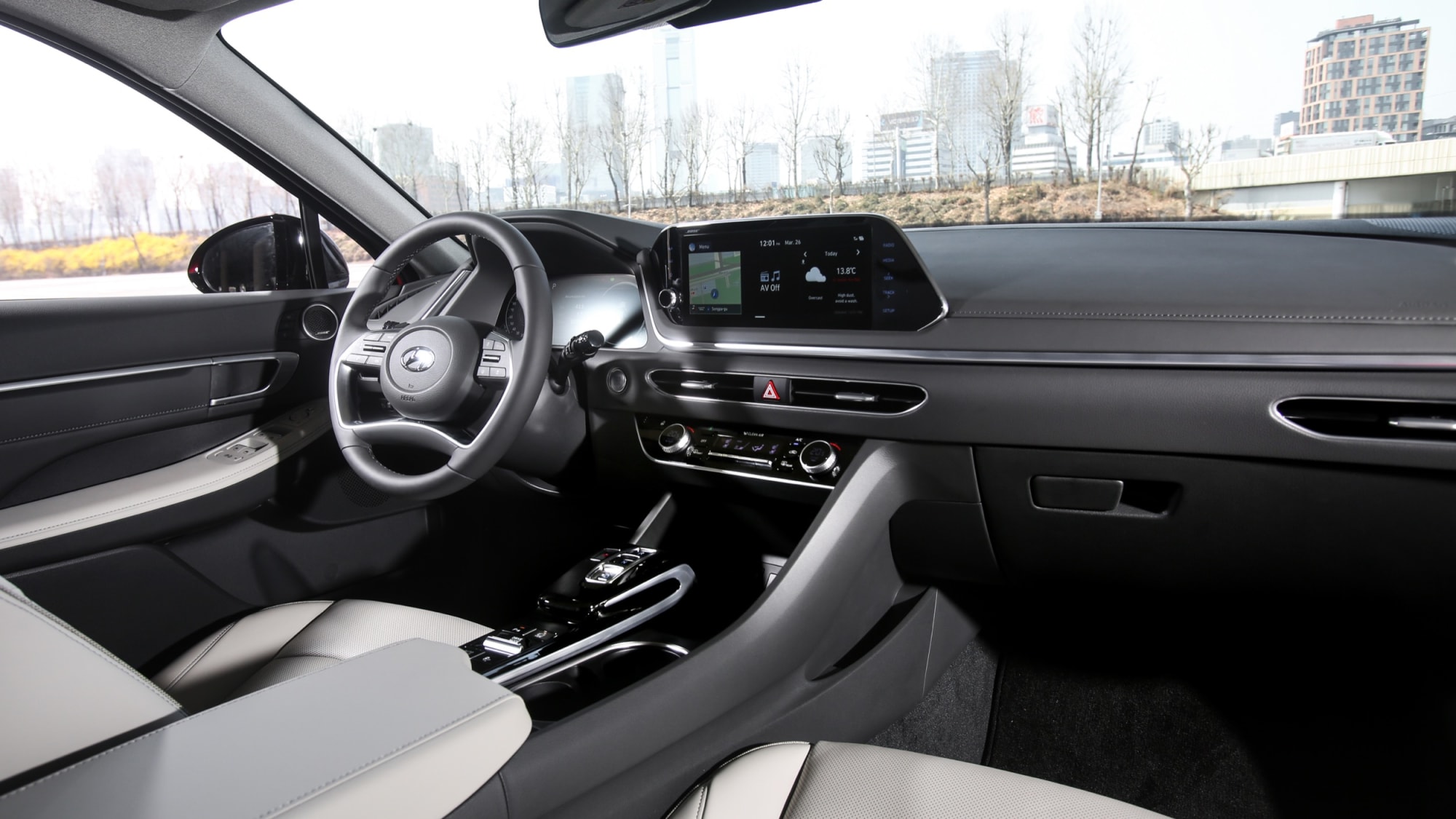 The 2020 Sonata also carries some new left-field tech, but it's not meant for everyone. Hyundai's Digital Key lets owners use their phones in place of actual physical keys, but it's only available for Android users, which means Apple users (like myself) are cut out from this tech. It's a bummer, but both platforms still get access to Hyundai's Blue Link connected-car app, which offers remote start, locking and unlocking and basic stuff like that.

How I'd spec it

Even with all that whiz-bang stuff I mentioned, the Sonata is mighty affordable, with my second-highest SEL Plus trim asking $27,650 before options and $31,265 when everything is said and done. That's a great price, and to be honest, this Sonata is pretty much exactly how I would spec one for myself.

The Sonata SEL Plus' $27,650 base price is impressive, considering it comes with the 1.6-liter turbocharged engine, a 12.3-inch gauge cluster screen, wireless device charging and an autodimming rearview mirror. I'd probably move to a less grating color, but the $2,750 Tech Package remains a must-have thanks to a solid Bose sound system, Highway Drive Assist and a massive panoramic moonroof. I wouldn't move up to the $33,500 Limited trim unless you really want a head-up display and a surround-view camera.

Down to brass tacks

The midsize sedan segment was once the place to be, but even though crossovers have swallowed up a sizable chunk of its sales, this corner of the industry is producing some of the best metal it has in years. The new Honda Accord places a higher focus on driving dynamics, but its interior doesn't feel nearly as premium as the Sonata's. The latest Camry can wield a 300-horsepower V6, and it'll soon be available with all-wheel drive, but its style (and, again, its fanciness) lags behind the Hyundai's. If you think the Sonata is just a bit too much, sister company Kia has a new Optima on the way that is also very, very good.

The last couple generations of Hyundai Sonata were a little boring, with ho-hum anonymous aesthetics inside and out. It was a fine car, but it didn't exactly make a statement. The 2020 Sonata, on the other hand, screams its benefits from the mountaintops with an out-there design but the same focus on value that Hyundai has always held dear. Even if you're not exactly sold on the styling, the Sonata is worth your hard-earned money for so many other reasons.