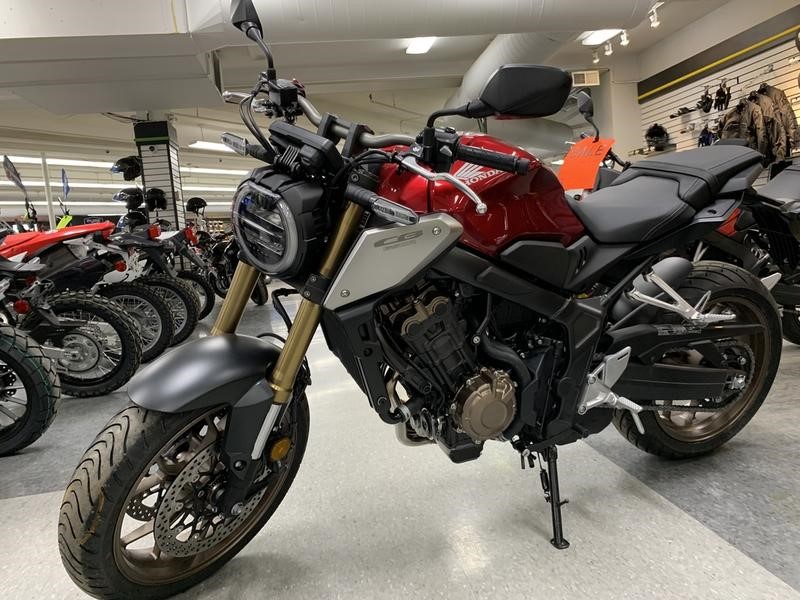 The "Neo Sports Cafe" CB650R may look a little different, but its engine is a classic Japanese sportbike gem.

You might not be aware that Honda got its start in the US by selling motorcycles. It has continued to do so since the 1960s, and while the car business may have somewhat overshadowed them, Honda is still cranking out thoughtfully engineered, approachable and affordable bikes to this day.

Affordable, approachable and thoughtfully engineered are great descriptors for Honda's "Neo Sports Cafe" CB650R with which I've recently been spending time. The CB650R wears its Honda sport-bike DNA proudly, with a high-revving engine and its high footpegs, but unlike a hardcore sport bike, it's comfortable and easy to use on a daily basis.

The heart of the CB650R is its 649-cc, liquid-cooled inline-four-cylinder engine. It's a classic Japanese sport-bike engine with a sky-high redline of 12,800 rpm. The engine is very smooth in how it makes power, and the throttle is well-tuned, but it's not what I'd call eager off the line -- the engine doesn't make peak torque until 8,500 rpm. To people used to big twins, that seems bonkers, but it's kind of par for the course with this type of engine.

The CB's engine makes its peak power just 800 rpm below redline, and while the engine feels great up there, it feels a little weird wringing it out that hard for those of us with an overdeveloped sense of mechanical sympathy. Honda USA doesn't publish horsepower figures for its motorcycles, but the Euro version of the bike is rated for 93 horsepower, and I'd say that feels right on the US model.

One downside to this particular inline-four is that once you get it up over 6,000 rpm -- which is always -- it becomes very buzzy. The engine's vibrations get transmitted a little too clearly to my hands and feet. It's not dirt-bike bad, but it's enough that I felt it after getting off of the bike.

The engine is also home to what is arguably one of the prettiest exhaust manifolds to be fitted to a motorcycle. The four chrome pipes are tightly packed in a line and waterfall down gracefully to the collector and the low-mounted catalytic converter. This design is borrowed from the CB400F of the early 1970s, and it's incredible.

The CB comes packing a six-speed transmission that, in typical two- and four-wheel Honda fashion, is very slick and easy to use. It's paired with a hydraulically assisted cable clutch that offers smooth modulation coupled with a super-light pull at the lever.

With a list price of $9,199, I would have liked to see a more advanced suspension setup on the CB, but what's given isn't bad -- it's just not adjustable beyond rear shock preload. As a larger rider, this means the bike feels overly soft. Despite not being adjustable, the fork comes from Showa and is a separate function fork, which is cool. This means that one fork leg handles compression, the other handles rebound, and never the twain shall meet.

Now we move to what I think is the weakest point of the CB650R -- its brakes. I will preface by saying that the brakes on the bike aren't bad -- they've never failed to stop me in a reasonable distance -- but they aren't what I'd call confidence-inspiring, despite now having ABS as standard. The CB's front brake lever is soft. There is a long pull before the brakes start to bite, and when you get there, it feels a little squishy. If I had to hazard a guess, I'd say that changing out the brake lines for some braided stainless steel units, and maybe swapping pads for something with more initial bite would solve this. That said, the 320mm dual front rotors and Nissin calipers look like they'd stand up to a track day with little issue.

Ergonomically, the CB650R is a winner. It's a compact bike with a reasonable 31.9-inch seat height. It feels much lighter than its 447-pound wet curb weight would suggest, which adds to my confidence when moving it around at low speeds. Despite having a transverse four-cylinder engine, the CB feels super narrow between my legs, which makes it easy to grip with my knees, reducing hand and wrist strain. I also found the CB650R to be a lane-splitting champion. My shoulders are the widest point of the bike, which makes it a breeze to filter through cars at a stoplight or thread my way through slow traffic.

Other highlights include full-LED lighting and a gorgeous shade of red paint that Honda calls Chromosphere Red. That, paired with the bronze accents on the engine and the dull silver radiator shrouds make it a seriously eye-catching machine. The retro-futuristic LED gauge is cool but can be hard to read in direct sunlight. Finally, Honda needs to cut the crap with its horn button placement. Put it in the same place as everyone else: below the turn signal switch. I hate feeling like an idiot for beeping the horn in traffic while going for a turn signal, and finding a turn signal button when I need the horn is even worse.

Once out of traffic and onto the open tarmac, the little red Honda truly starts to come into its own. The bike feels nimble and light, willing to respond to my inputs without complaint. It's happy to lean over in a corner and requires little to no effort to maintain a line from entry to apex to exit. It's a comfortable bike, and spending a few hours in the saddle is no big deal, though the high pegs and compact nature of the bike did start to take a toll on my knees after a while. This likely wouldn't be a problem for a rider of more average height.

The CB is a totally reasonable machine, but there's something about it, probably the rev-happy nature of the engine, that makes me want to ride it aggressively. It's a bike that rewards you for beating on it a little, and I'd be lying if I didn't get strong Tom Cruise-in-Top Gun vibes while wringing out the motor.

The CB650R would have been awash in competition a decade ago, but with the changing face of the motorcycle industry, it's the only bike in its class that still has a four-cylinder engine. Yamaha's naked middleweight MT-07 is a twin; ditto for Suzuki's long-lived SV650 and Kawasaki's Ninja 650. In their move to lower cylinder counts, these bikes gained torque but lost some of what made Japanese motorcycles so special.

The Honda CB650R isn't cheap, and it isn't typical, but it does look and feel like a special machine. It takes the best of Honda's long history of sport-bike engineering and applies it to a motorcycle that rewards your skill but doesn't punish you for riding it in traffic. It's well-built and sensible without being boring. In the end, it's a Honda, and that's a good thing.