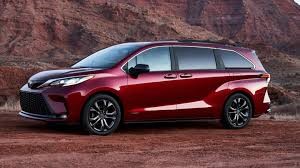 Toyota's family hauler has been redesigned from the ground up and is packed full of new tech and luxury features.

It's been over a decade since the current, third-generation Toyota Sienna minivan debuted, and in recent years, it's grown a bit stale, overtaken by newer rivals like the Chrysler Pacifica and Honda Odyssey. But Toyota on Monday officially unveiled the new 2021 Sienna, which has been redesigned from the ground up and is gunning for the minivan segment crown. (See how the 2021 Sienna compares with its rivals in our Sienna, Odyssey and Pacifica spec comparison.)

This fourth-generation Sienna was designed by CALTY's Newport Beach, California, and Ann Arbor, Michigan, design teams, but it looks wholly Japanese. Toyota describes the new Sienna as "bold, sexy and provocative," and says the front end's massive grille was inspired by the Japanese Shinkansen bullet train. More than anything, it reminds me of the awesome, boxy, overstyled JDM minivans that we don't get in the US.

I don't think the Sienna looks as outright aggressive as other recent Toyota models, and that's a good thing. The bulging rear fender is lifted from the Highlander but looks more natural and soft here, and there are a number of nice, subtle surfacing changes like the lines coming off the LED headlights. The rear is a bit more angular, with slim LED taillights and a lot of creases, and the tailgate has a slight whiff of a ducktail spoiler. An XSE model (the one shown in red) gets a sportier body kit, dark 20-inch wheels and different interior trimmings.

Toyota gave the interior a radical overhaul, too. The automaker says minivan owners don't want to feel like they're driving a bus, so the wide dashboard is more similar in design to the brand's SUVs. It's got a high-mounted infotainment display and a nice mix of colors and materials, and it looks more upscale overall. The biggest change is a huge "bridge console" between the front seats that's connected to the dash, which Toyota says is positioned for better ergonomics and comfort. That console offers cup holders, a wireless phone charger and some additional storage compartments, while the open area underneath is large enough to fit a purse or a backpack.

But I'm most interested in the second row of seats. The new Sienna has available as an option Super Long Slide captain's chairs, which can slide up to 25 inches fore and aft. These reclining seats can be equipped with built-in ottomans, too. Lower trims get three-across seats in the second row with a stowable middle seat. On the top trims the seats are covered in leather with both heating and ventilation for the front two occupants, while the second row can be heated. (The second-row seats aren't removable and can't fold, though, due to integrated side airbags.)

The new Sienna rides on Toyota's modular TNGA-K platform, the same one underpinning cars like the Camry, Avalon and Highlander. Compared with the 2020 model, the new generation is 3.1 inches longer overall and rides on a 1.2-inch-longer wheelbase, and it's slightly wider and a little lower in height. Toyota worked to make the new Sienna quieter and less affected by external vibrations, as well.

For the first time, the Sienna is available as a hybrid -- and only as a hybrid. The sole powertrain is the same basic setup found in other Toyota hybrid models like the RAV4, using a 2.5-liter four-cylinder engine paired with two electric motors and a battery pack mounted under the front seats. The Sienna's hybrid system puts out 243 total horsepower, 53 hp less than the current model's V6 engine. But power isn't the point: Toyota says it estimates the 2021 Sienna will get 33 miles per gallon combined, way better than the 21 mpg that the 2020 Sienna gets. It also bests the Odyssey and Pacifica, both of which use V6 engines and get 22 mpg combined.

Not giving the Sienna a plug is intentional, Toyota says, and there are no plans for a PHEV version. A lot of Sienna owners are repeat customers, so the new one needed to feel familiar, with no need to plug it in to achieve maximum efficiency. In addition to the standard three-year/36,000-mile basic warranty, the 2021 Sienna has a five-year/60,000-mile powertrain warranty and an eight-year/100,000-mile warranty for all hybrid components including the battery.

All-wheel drive is an option on all trim levels, with the system using a separate electric motor for the rear wheels instead of a traditional transfer case and driveshaft (no word on if it adds any extra horsepower). It's able to send up to 80% of torque to the rear wheels, and Toyota says the all-wheel-drive model is more agile in the corners. I expect the AWD Sienna to get slightly worse fuel economy than the FWD model, though Toyota hasn't released official numbers.

The 2021 Sienna has multiple driving modes including one for EV-only operation (for very short distances at low speeds), and there's an adjustable regenerative braking feature that mimics the act of downshifting, ideal for hilly terrain. A new Predictive Efficient Drive feature remembers driving habits, road conditions and repeated routes to optimize when the battery is charged by the hybrid system. This feature is also found in the new 2021 Venza hybrid.

Like the current Sienna, the new one is able to tow up to 3,500 pounds, and it has an available 120-volt AC outlet and 1,500-watt inverter to power gear and accessories. Toyota will offer accessories from Yakima that have been designed for the Sienna including a bike rack, cross bars and a rooftop carrier. Who needs an SUV when you have a minivan? 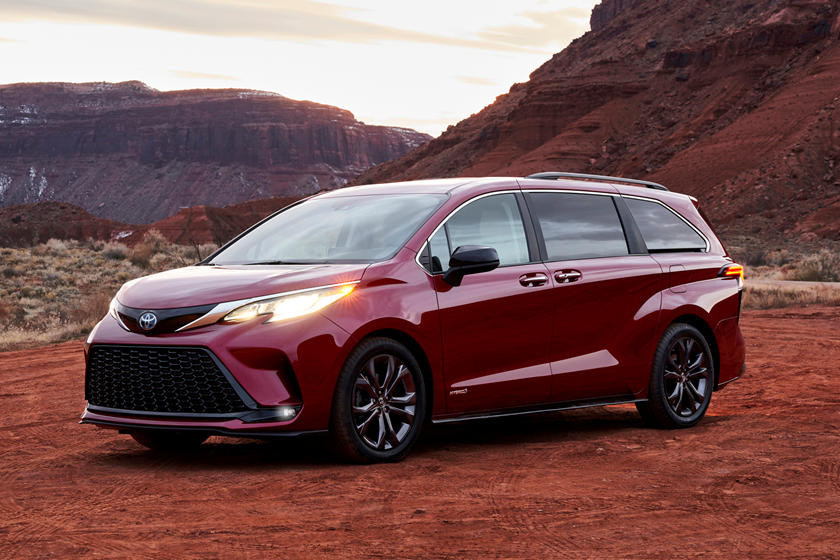 More than anything, minivans are all about interior functionality, and the 2021 Sienna has it in spades. There are as many as 18 cup holders, six more than the maximum offered by the 2020 model. Standard equipment for every Sienna includes power sliding doors, auto up/down windows, three-zone automatic climate control and second-row sunshades. Climbing the trim level ladder -- LE, Limited, XSE and Platinum -- adds features like kick-activated sliding doors and power tailgate, four-zone auto climate control, a sunroof, sunshades for the third row and a power tilt and telescoping steering wheel that's also heated. The Limited trim gets a built-in vacuum and storage box, while the Platinum replaces the box with a refrigerator.

The "base" infotainment setup is a 9-inch touchscreen with Apple CarPlay, Android Auto, Amazon Alexa and SiriusXM capability, six speakers and seven USB ports. Moving up in the trim levels adds HD Radio, onboard Wi-Fi, navigation and a 1,200-watt JBL audio system with 12 speakers and a subwoofer. There's an available 11.6-inch rear entertainment system with 1080p resolution and an HDMI input, a remote controller and a pair of wireless headphones. A 7-inch screen in the gauge cluster can show hybrid system info, while an optional 10-inch head-up display can project navigation info, as well.

Toyota's Safety Sense 2.0 suite of driver assist features is standard across the board, including automated emergency braking with pedestrian detection, blind-spot monitoring, adaptive cruise control, blind-spot monitoring, rear cross-traffic alert, lane-departure warning with steering assist, road sign assist and automatic high beams. Every 2021 Sienna has 10 airbags, including curtain airbags for all three rows and the aforementioned side airbags built into the first and second-row seats. A digital rearview mirror and a 360-degree camera with a curb view are new options, and there's also a rear-seat occupant reminder system.

Toyota hasn't released any pricing yet, but the Sienna will go on sale toward the end of the year and will continue to be built at Toyota's plant in Indiana. It will have to face still-tough competition in the form of the face-lifted Chrysler Pacifica and Honda Odyssey and an upcoming next-gen Kia Sedona. (See how it stacks up against those competitors in our spec comparison story.) But, at least for now, the 2021 Sienna seems poised to be a major contender.