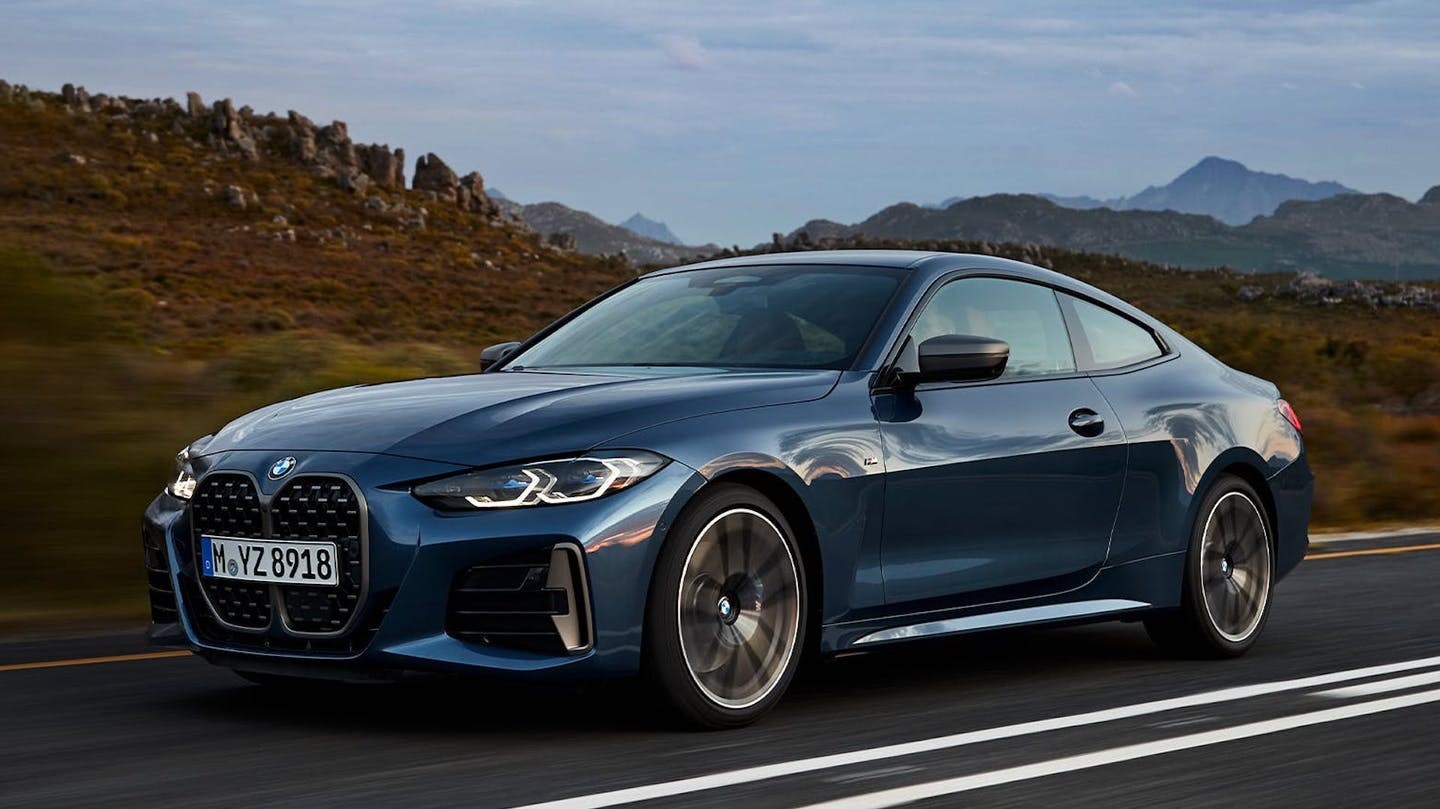 With its turbocharged engines, luxurious appointments and robust in-car and driver-assistance tech, BMW's new 4 Series proves it's what's behind that grille that counts

With its turbocharged engines, luxurious appointments and robust in-car and driver-assistance tech, BMW's new 4 Series proves it's what's behind that grille that counts.

From its turbocharged powertrains to its robust cabin tech to its advanced driver-assistance systems, there are a lot of reasons to like the 2021 4 Series, which BMW officially revealed Tuesday. But the one thing everyone's going to get hung up on is the styling -- specifically, that enormous grille.

Yes, the 2021 BMW 4 Series has the enlarged kidneys first seen on the Concept 4 showcar from the 2019 Frankfurt Motor Show, as well as the all-electric i4. It's definitely... a look. And it's one we don't like, at least in photos. BMW says the grille "is framed by surfaces with a three-dimensional mesh structure," so there's at least some interesting detail, though it kind of loses any luster it might've had by bolting the European front plate in the middle. (It's going to look awful in US press fleet spec, with a bright yellow New Jersey plate smack dab in the middle.) Thankfully, BMW says this grille treatment won't make its way to the company's other models.

The 2021 4 Series will be offered in 430i, 430i xDrive and M440i xDrive models, the latter of which gets darker exterior trim and larger side air intakes on the front fascia. LED headlights are standard across all models, and the shape just doesn't work with those giant buck teeth in the middle. Compared to an equivalent 3 Series sedan, the new 4 Series is 2.2 inches longer, 1 inch wider and 2.2 inches lower. But it rides on the same 112.2-inch wheelbase. See how it stacks up to its rivals in our spec comparison.

Luckily, the rest of the 4 Series looks pretty darn good, with a tapering roofline similar to that of the larger 8 Series coupe. All 4 Series coupes come standard with 18-inch wheels, though a variety of 19-inch options are available, as are M Sport brakes with either blue or red calipers, an aero kit and a rear lip spoiler. The LED taillights have an interesting light signature not unlike that of the recently revealed 2021 Acura TLX, and honestly, we think the new 4 Series looks best from the rear three-quarter view.

Step inside, and the 4 Series' design is far less polarizing. The cabin is largely the same as what you'll find in the 3 Series sedan -- the 4 Series' four-door sibling -- with leather surfaces available in a range of colors, flush-mounted controls on the center console and several different wood and metal inlay options. Being a two-door coupe, the rear seats aren't super spacious, but they can at least be folded flat to accommodate longer items from the 12-cubic-foot trunk.

The 4 Series comes standard with analog gauges and a 5.1-inch color display in the instrument cluster, as well as an 8.8-inch center touchscreen for the iDrive 7 infotainment suite. Opt for the Live Cockpit Professional package and you upgrade to a 12.3-inch fully digital gauge display, like the one offered in BMW's other models, as well as a 10.2-inch central multimedia screen. Regardless of models, navigation comes standard, with real-time traffic data from BMW Maps. And hey, both Apple CarPlay and Android Auto are standard -- finally! -- and wirelessly, no less.

As with the 3 Series, the 4 Series gets BMW's Intelligent Personal Assistant artificial intelligence tech, activated by saying, "Hey, BMW" -- kind of like the "Hey, Mercedes" function found in Benz's MBUX. Unlike MBUX, though, BMW's system is really just for controlling vehicle functions and working with the online navigation data. It's still useful, just not as robust. In other words, no, your BMW can't tell you a joke.

A particularly cool tech upgrade is the optional Parking Assistance Package, which not only includes a 3D surround camera, but has a back-up assistant that actually memorizes the last 150 feet of your journey at speeds below 20 mph, and can automatically trace the same path in reverse. For the 4 Series, this package adds BMW's new drive recorder, which can automatically capture 20 seconds of video around the moment of an impact and save it to the car's hard drive. Your insurance claims adjuster will love it.

The 430i comes with BMW's 2.0-liter turbo I4 engine, delivering 255 horsepower and 294 pound-feet of torque. Rear-wheel drive is standard but, as its name suggests, the 430i xDrive comes with all-wheel drive. These models accelerate to 60 mph in 5.5 and 5.3 seconds, respectively. Regardless of driveline, the 2.0-liter turbo engine is paired with an eight-speed automatic transmission.

The M440i xDrive, meanwhile, uses a 3.0-liter turbo I6 engine, which now has a 48-volt mild-hybrid battery, which delivers supplemental electric boost during acceleration and smooths out the action of the stop-start system. (The engine can now shut off below 9 mph rather than waiting until the car comes to a complete stop.) All told, the 3.0-liter I6 produces 382 hp and 369 lb-ft. Its standard all-wheel drive and M Sport rear differential allow the M440i to accelerate to 60 mph in 4.3 seconds. Once again, an eight-speed automatic is the only transmission available.

All 4 Series models get the same hydraulic-lift shock absorbers as the new 3 Series, which we love. This hardware smooths out road vibrations and reduces body movement, but doesn't give up any overall feedback or handling prowess. Compared to the 3 Series, the 4 Series has increased damping forces, firmer springs and larger anti-roll bars, and the coupe sits 0.4 inches lower to the ground. The M440i comes standard with an M Sport suspension, with an even stiffer tune. Finally, the Adaptive M chassis option allows for automatic adjustment of the adaptive dampers, though if our experience with the 3 Series is anything to go on, we think most buyers will prefer the standard and M Sport suspension setups just fine. Speed-sensitive power steering is standard on the 4 Series, while M Sport and M440i models get variable-ratio steering.

Yes, a proper M4 is coming, too, but we won't see that version until after the four-door M3 debuts, likely sometime in 2021.