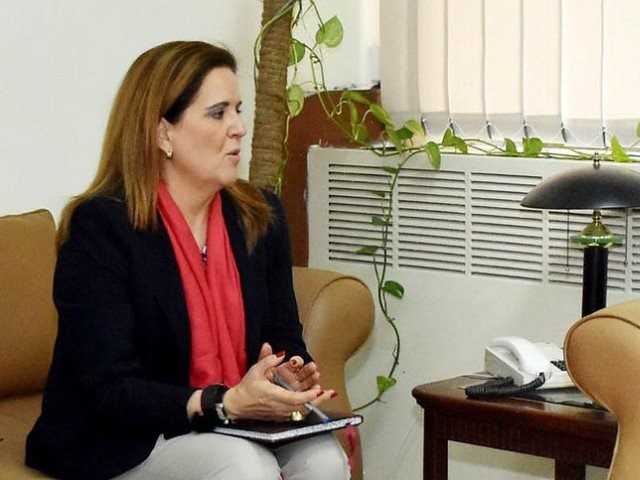 The International Monetary Fund has said that the economic and security situation in Pakistan has improved, adding that its latest economic reform programme is on track too.

“The government of Pakistan is now determined and committed to implementing strong and solid economic programmes with IMF’s support,” said Maria Teresa Daban Sanchez, the IMF resident representative for Pakistan,

The targets and objectives of the fiscal and the monetary policies and the power sectors have been achieved for the first quarter, she said. The programme is on track and the policies are getting good results.

The economic challenges being faced by Pakistan today is the result of imbalance policies over the years, she remarked.

No adjustments were made in power tariff, there is circular debt, policy rate that was negative in real terms maybe because it was favoring some businessmen but it was increasing inflation, she explained. The fiscal deficit was too high and that was financed by borrowing from the central bank, the IMF representative said.

Pakistan’s economy is currently in the process of transition, said Daban. Currently, the government is reversing the country’s wrong policies and implementing ones which will benefit it, she added.

The process is slowing down the economy, but it is responding to the change positively. We believe that this will reduce inflation too, she said.

She recognised the steps taken by the government to improve the country’s security situation.

“Pakistan has put behind its difficult years of security,” she remarked. “Now, it is time for the business community and society in general to enjoy this new time and to really unleash the potential of Pakistan.”

Many traders in Pakistan staged protests after they were asked to show documentation for their purchases. Speaking about their resistance, she said that documentation is critical as it will help bring the informal economy into formal economy. This will help reduce tax evasion, money laundering and allow better tax administration.

“Everybody and all the sectors need to be on the tax net,” she said. “The tax system has to be simple, transparent and efficient, perhaps to be applicable to everyone.”

Those public sector enterprises that have been making losses are a big burden on the budget, Daban remarked. The government needs to strategise on this.

Few of them can be kept because the role of the state is very important. Some can be liquidated and then privatised or merged, she advised. The government needs to work on this to reduce the burden on budget, she elaborated.

Many steps are being taken to tackle corruption and provinces have a strong responsibility in this regard, she remarked.

“CPEC is a useful investment in Pakistan and it will help the country improve its infrastructure and transportation,” she said. “We believe that this is something that will benefit Pakistan tremendously”.

To a question regarding FATF, she said the government of Pakistan is committed to making all of the changes and improvements that are needed and requested by the international experts.

On December 19, the IMF executive board completed the first review of Pakistan’s economic performance under the 39- months Extended Fund Facility.

The completion of the review allowed Pakistan to draw $452.4 million bringing total disbursements to $ 1,440 under the $6 billion loan programme