Why earthquakes do occur and what are its aftermaths 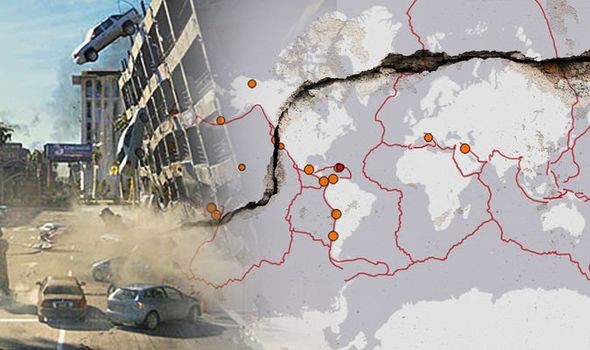 Human’s biggest fear is earthquake. Why do earth quake happens, what are its reasons. What can be the aftermaths of an earthquake? How we can save our life from earthquake. What are the tectonic plates, how they are aligned together to shape the earth, All this your will come to know in this article.

Fear is trembling always comes, when the land below your feet moves suddenly. You get shocked and instantly start thinking about the land bellow your feed to get divided into two pieces if you are in open ground or the roof of your house will get down if you are inside of your house. Earthquake is really dangerous and can cause instant destruction. In 2005, the largest earthquake came in Kashmir, Pakistan about 8 o’clock early morning, the aftermaths of it was terrifying. Thousands of Kashmir’s people died, and almost their entire houses fell down. Most of them died while sleeping and some of them died because of land sliding. In short, they lost important life’s and assets.

The reason behind the large amount of destruction in Kashmir’s Earthquake was the lack of planning in construction of houses. Most of houses are made of mud and stones. People did not even think about the security of their life by improving their home conditions and planning the cities.

Earthquakes are usually caused when rock underground suddenly breaks along a fault. This sudden release of energy causes the seismic waves that make the ground shake. When two blocks of rock or two plates are rubbing against each other, they stick a little. They don't just slide smoothly; the rocks catch on each other.

Earthquakes occur because the Earth's tectonic plates are in motion. The plates do not move smoothly and evenly. Great stresses build up along the plate boundaries. When a plate moves suddenly a great amount of energy is released in the form of wave energy.

Aftermaths of an Earthquake:

The primary effects of earthquakes are ground shaking, ground rupture, landslides, tsunamis, and liquefaction. Fires are probably the single most important secondary effect of earthquakes.

A tectonic plate (also called lithospheric plate) is a massive, irregularly shaped slab of solid rock, generally composed of both continental and oceanic lithosphere. Plate size can vary greatly, from a few hundred to thousands of kilometers across; the Pacific and Antarctic Plates are among the largest. Plate thickness also varies greatly, ranging from less than 15 km for young oceanic lithosphere to about 200 km or more for ancient continental lithosphere (for example, the interior parts of North and South America). 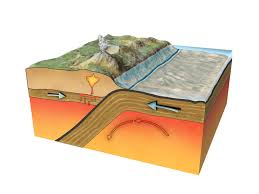 Biggest Earthquakes in history of world:

This earthquake occurred in the Shaanxi province (formerly Shensi), China, about 50 miles east-northeast of Xi'an, the capital of Shaanxi. More than 830,000 people are estimated to have been killed. Damage extended as far away as about 270 miles northeast of the epicenter, with reports as far as Liuyang in Hunan, more than 500 miles away. Geological effects reported with this earthquake included ground fissures, uplift, subsidence, liquefaction and landslides. Most towns in the damage area reported city walls collapsed, most to all houses collapsed and many of the towns reported ground fissures with water gushing out.

Damage extended as far as Beijing. This is probably the greatest death toll from an earthquake in the last four centuries, and the second greatest in recorded history.

Contemporary accounts said the walls of Syria’s second-largest city crumbled and rocks cascaded into the streets. Aleppo’s citadel collapsed, killing hundreds of residents. Although Aleppo was the largest community affected by the earthquake, it likely did not suffer the worst of the damage. European Crusaders had constructed a citadel at nearby Harim, which was leveled by the quake. A Muslim fort at Al-Atarib was destroyed as well, and several smaller towns and manned forts were reduced to rubble. The quake was said to have been felt as far away as Damascus, about 220 miles to the south. The Aleppo earthquake was the first of several occurring between 1138 and 1139 that devastated areas in northern Syria and western Turkey.

This was the third largest earthquake in the world since 1900 and the largest since the 1964 Prince William Sound, Alaska temblor. In total, 227,898 people were killed or were missing and presumed dead and about 1.7 million people were displaced by the earthquake and subsequent tsunami in 14 countries in South Asia and East Africa. (In January 2005, the death toll was 286,000. In April 2005, Indonesia reduced its estimate for the number missing by over 50,000.) According to official estimates, 300,000 were also injured, 1.3 million displaced, 97,294 houses destroyed and 188,383 damaged in the Port-au-Prince area and in much of southern Haiti. This includes at least 4 people killed by a local tsunami in the Petit Paradis area near Leogane. Tsunami waves were also reported at Jacmel, Les Cayes, Petit Goave, Leogane, Luly and Anse a Galets. This earthquake struck a 200-mile stretch of northeast Iran, with the epicenter directly below the city of Demghan, which was at that point the capital city. Most of the city was destroyed as well as the neighboring areas. Approximately 200,000 people were killed.

This earthquake brought total destruction to the Lijunbu-Haiyuan-Ganyanchi area. Over 73,000 people were killed in Haiyuan County. A landslide buried the village of Sujiahe in Xiji County. More than 30,000 people were killed in Guyuan County. Nearly all the houses collapsed in the cities of Longde and Huining. About 125 miles of surface faulting was seen from Lijunbu through Ganyanchi to Jingtai. There were large numbers of landslides and ground cracks throughout the epicentral area. Some rivers were dammed, others changed course.

This earthquake brought extreme destruction in the Tokyo-Yokohama area, both from the temblor and subsequent firestorms, which burned about 381,000 of the more than 694,000 houses that were partially or completely destroyed. Although often known as the Great Tokyo Earthquake (or the Great Tokyo Fire), the damage was most severe in Yokohama. Nearly 6 feet of permanent uplift was observed on the north shore of Sagami Bay and horizontal displacements of as much as 15 feet were measured on the Boso Peninsula. This quake brought extreme damage in Ashgabat (Ashkhabad) and nearby villages, where almost all the brick buildings collapsed, concrete structures were heavily damaged and freight trains were derailed. Damage and casualties also occurred in the Darreh Gaz area in neighboring Iran. Surface rupture was observed both northwest and southeast of Ashgabat. Many sources list the casualty total at 10,000, but a news release from the newly independent government on Dec. 9, 1988, advised that the correct death toll was 110,000. (Turkmenistan had been part of the Soviet Union, which tended to downplay the death tolls from man-made and natural disasters.)

On October 8, 2005, at 8:50 a.m. local time, a magnitude Mw = 7.6 earthquake struck the Himalayan region of northern Pakistan and Kashmir. The earthquake epicenter was located approximately 9 km north northeast of the city of Muzaffarabad, the capital of the Pakistani-administered part of Kashmir, known as Azad Jammu Kashmir (AJK). 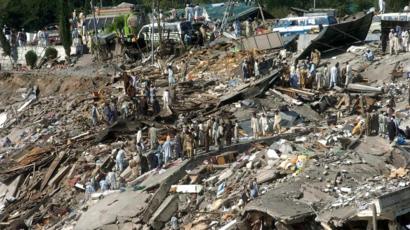