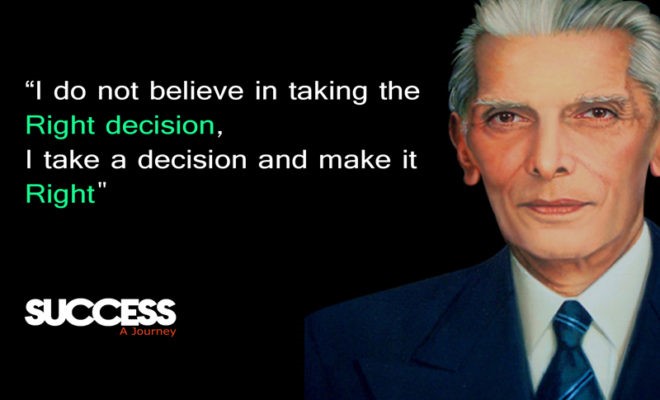 “Do your duty and have faith in God. There is no power on earth that can undo Pakistan.”’

...Mohammad Ali Jinnah was a proud man, proud for good reason; by the overriding force of his indomitable will, and that alone, he carved out a country for us. Not following the form of his day, Jinnah did not go to jail for a single day, never embarked on a hunger strike, did not encourage rowdy protest marches, he abhorred any form of violence..

This conviction was soon to be proved wrong. His buoyant optimism and his firm certitude in the future of this country clouded his perception of the calibre and character of the leaders who would immediately and later follow him. He failed to conceive that through their lack of ability, lack of integrity, their avarice, their unquenchable greed, their hunger for power, pomp, pelf and position, they would be the undoing of Pakistan.

He was the sole statesman this country has had. Those who followed were small men, narrow of thought... Within a quarter of a century, half of Jinnah’s Pakistan was lost... It is now an overpopulated, illiterate, bankrupt country...

When Jinnah addressed the first constituent assembly of the country on August 11th 1947, he embodied in his speech the core of his philosophy... his vision for the state he had founded. It was a fine piece of rhetoric; too fine, too moral, too democratic, too liberal, too full of justice, too idealistic for the Philistines. This speech...has been subject to distortion; it has inspired fear in successive governments which would have been far happier had it never been delivered...

On August 11th 1947, before the flag of Pakistan had even been unfurled, Jinnah told his people and their future legislators:

That same day, he made it clear to the future legislators and administrators that “the first duty of a government is to maintain law and order...” He told them he would not tolerate the evils of bribery, corruption, black marketeering and “this great evil, the evil of nepotism and jobbery.”