Soleimani funeral under way in Iran: All the latest updates 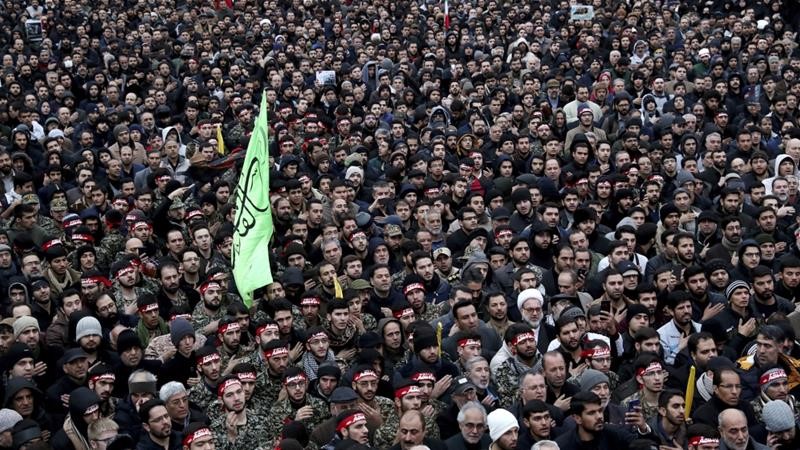 Funeral for Qassem Soleimani, head of Iran's Quds Force who was killed in Baghdad by US air strike, begins in Ahvaz.

Funeral processions to honour Qassem Soleimani, head of Iran's elite Quds Force who was killed in a US air strike in Baghdad, began in the Iranian city of Ahvaz early on Sunday, hours after his remains arrived from Iraq.

The move by the US has drawn worldwide condemnation from leaders and officials who fear that tensions in the region could escalate drastically. Iran's Supreme Leader Ayatollah Ali Khamenei warned that "a harsh retaliation is waiting".

On Saturday, US President Donald Trump threatened to hit 52 Iranian sites "very hard" if Iran attacked US citizens or assets.

President Donald Trump warned that the US would hit Iran harder than ever before if Tehran retaliates to the assassination of Soleimani.

Trump wrote on Twitter: "If they attack again, which I would strongly advise them not to do, we will hit them harder than they have ever been hit before!"

He followed up with another tweet, saying the US would use its "brand new beautiful" military equipment "without hesitation" if the Iranians retaliate.

Thousands of mourners gathered in Iran's southwestern city of Ahvaz, where funeral processions to honour Soleimani began on Sunday morning.

Footage on state television showed people dressed in black in Mollavi Square, holding flags in green, white and red - depicting the blood of "martyrs", while others held portraits of the slain general.

Soleimani's remains were returned to Iran on Sunday and flown to the city of Ahvaz in the country's southwest, the official IRIB news agency reported.