Whoa: Humayun Saeed is Going to Star in Ehd-e-Wafa Finale 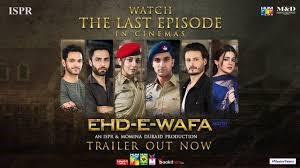 As the nation is already celebrating ‘the tea is fantastic’ victory of Pakistan over Indian armed forces one year to this day, Ehd-e-Wafa is celebrating this day with the release of its final trailer.

Arousing this sense of nationalism, the final trailer of Ehd-e-Wafa has a surprise for all its fans out there. And you’ve guessed it right, it’s a cameo appearance of Humayun Saeed and too as a major of Pakistan Army.

The trailer is funny yet emotional. It begins with an investigation scene that reminds us of the whole Abhinandan scenario that occurred last year. The whole scene has really good comic timing and keeps the audience wondering what will happen next.

In an interview, Humayun Saeed revealed that he was approached by DG ISPR himself for the cameo. He was honored by this gesture and also thought that it was a good role. He said that he was happy to play the role of an army officer.

I swear ISPR is on fire🔥
Loving this specially on this victorious day,27 feb🤣👏
Imma proud pakistani 💚🇵🇰#EhdEWafa pic.twitter.com/Uoze1jwKm0

The ‘Grand finale trailer’ also takes us through a journey of friendship, love, and commitment to one’s country as it recaps the storyline of the drama.

The trailer is so far being received well by the public and it has already reached 1.1 million views on YouTube in such a small span of time.

What are your thoughts about the finale? Does it meet your expectations? Let us know in the comment section below.