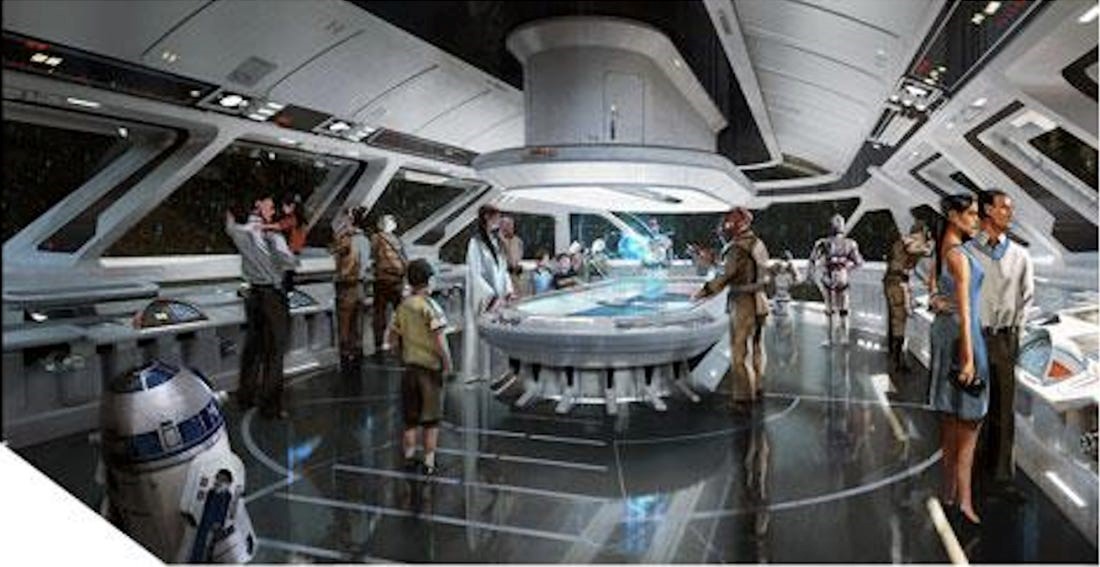 The Galactic Starcruiser hotel will begin taking guests in 2021, with reservations opening later this year.

Disney has provided a closer look at its Star Wars-themed resort coming to Walt Disney World in 2021. The hotel, which is designed to look like a Starcruiser, will begin taking reservations in 2020, Disney said Thursday. The company unveiled details of the hotel atrium and accommodation in a new video posted to YouTube, as well as revealing that all guests will be asked to take lightsaber training.

"Guests will be invited to participate in a variety of activities," Ann Morrow Johnson, executive producer for Walt Disney Imagineering, says in the video. "Both adults and kids alike will get to wield a lightsaber and face off against a training remote."

Aboard the Halcyon, you'll also be able to tour the bridge and help operate the ship's navigation and defense systems. "That training that you do as part of your bridge tour ultimately pays off as part of this much bigger galactic Star Wars story that you're part of," Johnson said.

Guests of Star Wars: Galactic Starcruiser will live aboard a starship for two nights. Entry to the hotel will be via a space shuttle with a window up top showing the journey through outer space, as the starship slowly comes into view. You'll then be deposited in the atrium of the hotel.

"Star Wars: Galactic Starcruiser is a completely new type of experience," Johnson said. "For the first time, we're going to invite guests to become the heroes of their own Star Wars adventure."

Concept art of the atrium shows droids, wookiees, Storm Troopers and a tube with holographic announcements. The cabins sleep up to five people, with the spaceship theme extending to the futuristic doors, pod-like bunk beds and windows showing you the view into outer space.

Disney said in December that the luxury hotel in Orlando, Florida, would be an "immersive" experience with a "cruise-style itinerary [with] 24/7 Star Wars storytelling."  Stays at the hotel will also include special passenger transports directly to Batuu -- the park's Star Wars-themed area.

"To get from Star Wars: Galactic Starcruiser to Star Wars: Galaxy's Edge and back, you'll remain fully in-story as you step aboard the transport ships designed specifically for this new immersive experience," the Disney Parks blog said in December. "It will connect you directly to a spaceport at Black Spire Outpost on Batuu."

The hotel is the latest piece of Disney's effort to create immersive Star Wars experiences for guests at its theme parks. The newest resort area launched May 31 in Disneyland and at Disney World in August. The first attraction at Star Wars: Galaxy's Edge was the interactive Millennium Falcon: Smuggler's Run ride, which allows you to help steer, repair a spaceship and even fire the missiles.