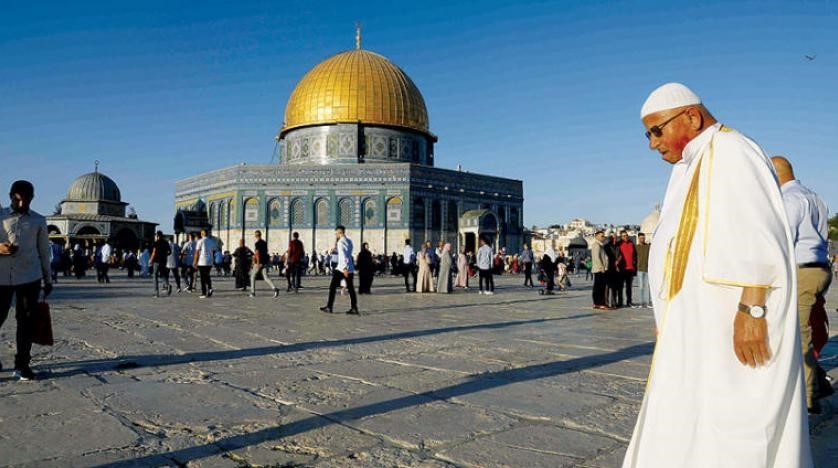 Palestinians and other Arabs are not interested in the promotion of 'religious tolerance' by highly intolerant regimes.

On December 21, right-wing British magazine The Spectator published an article by Ed Husain, a controversial figure on the British Muslim scene, entitled Islam's reformation: an Arab-Israeli alliance is taking shape in the Middle East.

Husain, a self-styled champion of "Islamic renaissance" who describes himself as a former Muslim extremist is seen by some as an ally of Islamophobia.

His article puts forward a bizarre narrative: That a burgeoning alliance between a handful of authoritarian Arab leaders, including Saudi Arabia's Crown Prince Mohammed bin Salman (MBS) and the UAE's Mohammed bin Rashid al-Maktoum, and Israel's Benjamin Netanyahu is a sign of "religious glasnost" in the Muslim world.

It was tweeted almost immediately after its publication by the Emirati Foreign Minister Abdullah bin Zayed.

It is not surprising that the UAE's leadership gave its stamp of approval to the article. Husain, after all, has close links to former British Prime Minister Tony Blair, who is a close friend and supporter of the UAE's rulers and their allies.

Husain's CV includes the title of former adviser to Blair, and a stint at the Blair Faith Foundation, whose stated goal was to counter religious extremism. This same foundation was mentioned in a proposal made by Blair to the UAE in 2016 for a $35m contract to "build its brand and reputation, and to establish powerful networks of influence".

In his pitch to the Gulf state, Blair, who recently offered his services to Egypt's military ruler, Abdel Fattah el-Sisi, bragged about his and his foundation's connections in more than 50 countries. Over the last couple of years, Blair has been defending himself against claims of impropriety over the direct and indirect consultancy payments he allegedly received from the UAE and Saudi Arabia for services rendered.

Husain's article peddles some of the questionable theories we have previously seen Blair promote. These include blaming the hostility Israel faces in the Middle East and beyond on Arab and Muslim "extremism" and "anti-semitism" and claiming that Arabs should become more "tolerant" in order to end the conflict. Also, the claim that conflicts involving Muslims, from the Philippines to the Caucasus, and from Palestine to Mali, are all linked, and again the fault of Muslims, and their "intolerant" religious doctrines.

At one point, Saudi-promoted Wahhabism was advertised as the main culprit. This is, of course, too simplistic, since the bulk of the conflicts Muslims are involved in today are not religious but political and exist outside Wahhabism's zone of influence. Husain himself had become an extremist without ever coming in touch with Wahhabism - the ideology of the group he joined, Hizbut-Tahrir, is anathema to Salafi Wahabism.

The irony is that the proponents of these views now appear to believe, as demonstrated in Husain's article, that the Saudis hold the key to religious enlightenment in the Muslim world, and "reformist" MBS's Saudi Arabia can bring peace to the Middle East by forming an alliance with fellow "peace-lover" Netanyahu's Israel.

Even from an Israeli perspective, the Netanyahu government is not an advertisement for religious enlightenment, tolerance or peace. Secular Israelis are feeling under siege in the face of the hegemony of religious bigotry, fascistic tendencies and the ever-increasing aggression and self-entitlement of illegal settlers. It is even worse for Israel's beleaguered Arab citizens, or the Ethiopian Jewish minority, let alone the Palestinians living under occupation.

It may be a coincidence that the International Criminal Court announced an imminent investigation into Israeli war crimes just the day before this article came out, but it was another blow to any misguided hopes that Netanyahu's Israel should be the source of inspiration for anyone in this region, let alone religious reformers.

The coincidental highlighting of the UAE's own dismal human rights record did not help either. The day after bin Zayed's tweet, Human Rights Watch (HRW) issued a damning report documenting systematic and brutal harassment of the relatives of Emirati dissidents. Dozens of relatives of jailed or exiled peaceful opposition figures are currently banned from travel, cannot renew identity documents, or have restricted access to jobs or higher education. Tolerance, it appears, does not start at home.

The chorus of international condemnations that greeted the announcement this week of sentences against those convicted of murdering Saudi journalist Jamal Khashoggi did not help either. It was another unwelcome reminder of the credentials of another key ally in this coalition for so-called "Islamic reformation".

Spin and self-promotion do not qualify as reform or renaissance, and its promotors lack authority.

This a reminder that the Arab-Israeli conflict has nothing to do with religion, any more than the current intra-Arab struggles. The main actors in the conflict, both Israeli and Arab, have been, and still are, predominantly secular rulers and groups. In both the Arab and Israeli camps, the leaders of the initial struggle, whether from the Israeli Labour party, the Palestinian Liberation Organisation or leaders like Egypt's Gamal Abdul Nasser and Syria's Hafiz al-Assad, were lukewarm towards religion. Islamist actors and Jewish religious extremists entered the fray much later, in the 1980s.

Palestinians and other Arabs are not interested in the promotion of "religious tolerance" by highly intolerant regimes, but in a halt to the campaigns of dispossession and oppression.

No one knows or cares what Netanyahu's religious beliefs are and how different they may be from those of Arab leaders. It is what is being done on the ground (harassment, dispossession, killings, etc) that is causing conflict.

For peace with Israel to happen, the war and the colonial appropriation of land first has to stop. For the UAE and its allies, the human rights abuses and foreign adventures must cease. The hypocritical manipulation of religion will not lead to peace and tolerance. Quite the reverse, it will drive continuing conflicts and resentment within the Muslim Arab community.