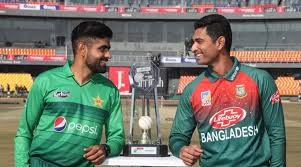 Lahore: Young Shaheen Afridi strikes in the second over of the match bowling Mohammad Naim out on the score of four. Bangladesh are 5-1 in 1.4 over

Bangladesh captain Mahmudullah has won the toss has decided to bat first against Pakistan in the 2nd T20I at Gaddafi Stadium in Lahore. Skipper Babar Azam said that they are playing an unchanged side and have no worries if they have to chase the target as well. Bangladesh have made one change, Mahedi Hasan comes in the side replacing Mohammad Mithun. It must be noted Pakistan won the first match of the three-match T20I series courtesy Shoaib Malik excellent return in international cricket.

It was neither pretty nor particularly engaging, but now isn't the time for Pakistan to worry about that. They followed a disciplined bowling performance with a gritty chase spearheaded by the returning Shoaib Malik, after a second-ball duck for Babar Azam threatened to turn a straightforward task somewhat hairy. It sealed a five-wicket win for Pakistan, snapping a six-match losing streak in the format, and ensuring they hold on to their No. 1 T20I ranking for now.

Malik's unbeaten 45-ball 58 was the only half-century of the game, coming at something of a canter after Bangladesh spread the field through the middle overs, happy to concede singles that weren't really theirs to give away, given the modesty of the total they were defending. Debutant Ahsan Ali, and towards the close Iftikhar Ahmed, gave him useful company, but with the asking rate never really allowed to rise above eight, Pakistan weren't in any imminent danger.

The bowlers were due thanks from the batsman for ensuring they never needed to get out of second gear. Shaheen Afridi began tightly, and Imad Wasim gave little away in the Powerplay after Bangladesh decided to bat on what looked, at the time, a belter of a surface. Though Tamim Iqbal and Mohammad Naim stuck around for 11 overs, the bowlers kept them on a leash throughout, and their opening partnership only produced 71 runs at 6.45 per over. Shadab Khan ensured the squeeze was maintained through the middle overs, and Bangladesh never got in a position to explode at the finish.

The caution Bangladesh displayed was surprising, particularly during the second half of the innings when it became clear wickets would no longer be a problem. While Pakistan's tightness made it difficult to score quickly, there was no evidence Bangladesh were ready to show any more ambition than the odd boundary off the loose ball, and it was only when Haris Rauf's final over went for 13 that the innings run rate exceeded seven an over.

For a team that preferred to deal in running between the wickets, there was a touch of tardiness there too. An ill-judged second run brought the first wicket when Tamim was found well short of his crease when Mohammad Rizwan whipped off the bails, and one of the few moments of genuine quality in an otherwise uninspiring game came when Shadab ran all the way to long-on off his own bowling, and followed up with a direct hit on the turn to catch Liton Das short of his ground.

Just because the target was low didn't mean Pakistan were set for a canter. They played three T20Is against Sri Lanka on this ground three months ago, had to chase targets of 166, 183 and 148, and fell short each time. Twice, they ended up scoring less than the 142 they needed in this game. When Babar fell second ball, tickling one to the keeper to record his first duck in T20Is, Pakistan looked in for a grind.

Ahsan Ali appeared to possess the temperament that will please Misbah-ul-Haq, pouncing on any loose deliveries to relieve the pressure on Mohammad Hafeez at the other end. For his own part, Hafeez began brightly before closing his bat face a fraction early off a Mustafizur Rahman slower ball, sending a leading edge to cover point. At that point, Pakistan were 35 for 2 in five overs.

From that point, Mahmudullah may wonder if he allowed the game to drift. The fields were spread out and the bowling notably defensive, almost as if it were a plan to allow the batsmen to take as many singles as they pleased as long as the boundaries didn't come. From the middle of the sixth over to the fifth ball of the 11th, when Ahsan holed out to long-off, Pakistan scored off 31 consecutive balls. Forty runs came off those 31 balls, and the asking rate dipped below seven with plenty of batting to follow.

For at least one of the two men recalled, this could be the beginning of yet another redemption story. Malik, who ended up walking away with the Player-of-the-Match award, milked the Bangladesh spinners, the visitors' tactics playing right into his hands. With Ahsan gone, he quickly assumed charge, keeping on top of the asking rate without once needing to play a shot in anger. The only time he took a risk, he was dropped at long-off following a valiant effort on the boundary, and when the ball trickled away for four, he had brought up yet another half-century.

Bangladesh would continue to plug away, dismissing Iftikhar Ahmed and Imad Wasim, but Pakistan continued to coast, and the match went into its final over without a hint of tension in the air. With two required off four balls and Malik off strike, Rizwan went for a heave, edging the ball straight to deep midwicket. It was the simplest of chances, and could have put a few beads of sweat on Pakistani foreheads had it been taken. Mohammad Mithun, however, made a mess if it, and Pakistan cantered back for the winning second run. It was only fitting that an insipid, indifferent performance from Bangladesh was sealed by a moment of ineptitude, as Pakistan took the lead in lead in a series that will hopefully contain more entertainment than was on display on Friday, in front of a half-full Gaddafi Stadium.