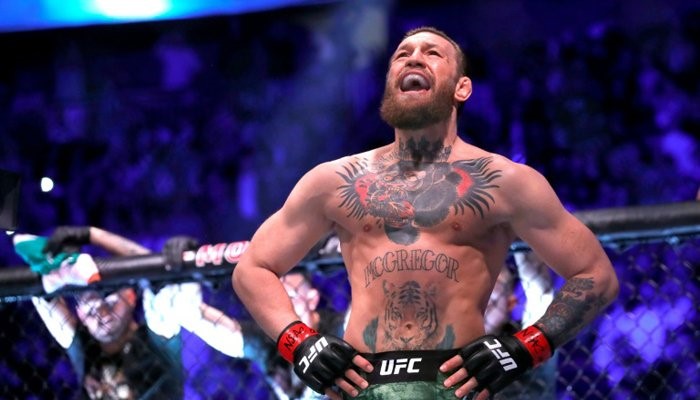 The two-division Ultimate Fighting Championship (UFC) World Champion said his fighting days were over in a Twitter message posted on his verified account, alongside a picture with his mother, Margaret.

"Hey guys I've decided to retire from fighting. Thank you all for the amazing memories! What a ride it's been!" he wrote.

"Here is a picture of myself and my mother in Las Vegas post one of my World title wins! Pick the home of your dreams Mags I love you! Whatever you desire it's yours."

The controversial Irish fighter, nicknamed "The Notorious", previously announced his retirement from the sport in March last year after being battered into submission by arch-rival Khabib Nurmagomedov in October 2018.

In April 2016 he also said he was retiring with a now-famous tweet: "I have decided to retire young. Thanks for the cheese. Catch ya's later."

It remains to be seen if he is more serious this time, but on Sunday he told ESPN: "I'm a bit bored of the game. I'm just not excited about the game. I don't know if it's no crowd. I don't know what it is. There's just no buzz for me.

His last appearance in the octagon was in January after a 15 month-absence, when he knocked out American Donald "Cowboy" Cerrone in a ruthless 40-second destruction in Las Vegas.

The 31-year-old, an icon of the UFC, is no stranger to controversy and hit the headlines last year for an attack on an older man in a Dublin bar that was captured in a viral video.

McGregor, one of the most popular fighters in MMA history, has a record of 22-4 and was the first UFC fighter to hold two championship belts at the same time.

He achieved that feat in 2016 when he stopped Eddie Alvarez in a lightweight title fight, adding it to his featherweight title.

That triumph was followed by a loss to boxing great Floyd Mayweather in a cross-combat superfight in 2017, his loss to Nurmagomedov, announcements of retirements and returns to fighting.

"If Conor McGregor feels he wants to retire, you know my feelings about retirement, you should absolutely do it," White said at the post-event press conference.

"I love Conor. There's a handful of people that have made this really fun for me, and he's one of them."

McGregor, who joined the UFC in 2013 after establishing himself as a two-division Cage Warriors champion, had been linked with a rematch against Nurmagomedov later this year.

There was also speculation of a 'superfight' against former middleweight titlist Anderson Silva, with the Brazilian great publicly touting a showdown over the weekend.

Only two weeks ago, McGregor declared Silva the greatest MMA fighter of all-time, but the Dubliner added he would "easily" make the top spot his own before retiring.

McGregor's exit comes hot on the heels of light-heavyweight champion Jon Jones and welterweight contender Jorge Masvidal asking to be released from the UFC.

White said he had no warning about McGregor's announcement but added: "That's Conor. You know how Conor works and that's how he does things.

"When you look at the star power that Conor McGregor, the star that he became, he introduced this thing globally to people in places that had never seen it before or been interested in it.

"Conor McGregor is not going to need any money any time soon. He loves to fight, he's passionate about it and he's got an incredible fighter IQ. Whatever his reason is, when a guy says he wants to retire, don't worry about it."