The new modem doesn't deliver much faster peak speeds, but the average 5G download rates should be higher.

Qualcomm has a new modem for next year's 5G phones that aims to boost the average speed on devices by aggregating different types of wireless signals.

The company on Tuesday unveiled its Snapdragon X60 5G modem, which is made using process technology of 5 nanometers, or 5 billionths of a meter. That results in lower power consumption and a smaller footprint for even sleeker devices. Like its predecessor, the X55, the X60 will run on everything from 2G to 5G networks, and it will access the slower but more reliable sub-6 Ghz networks and the faster but spottier millimeter wave networks.

What the X60 doesn't bring is much higher peak speeds. With the upcoming modem, you'll be able to download data over 5G networks at up to 7.5 Gbps and upload information as fast as 3 Gbps. The earlier X55 modem's download speed topped out at 7 Gbps, while its upload speed also was 3 Gbps.

You will, however, see faster average speeds, Qualcomm said. The X60 has the ability to aggregate the slower sub-6 networks with the faster mmwave spectrum, boosting overall performance. 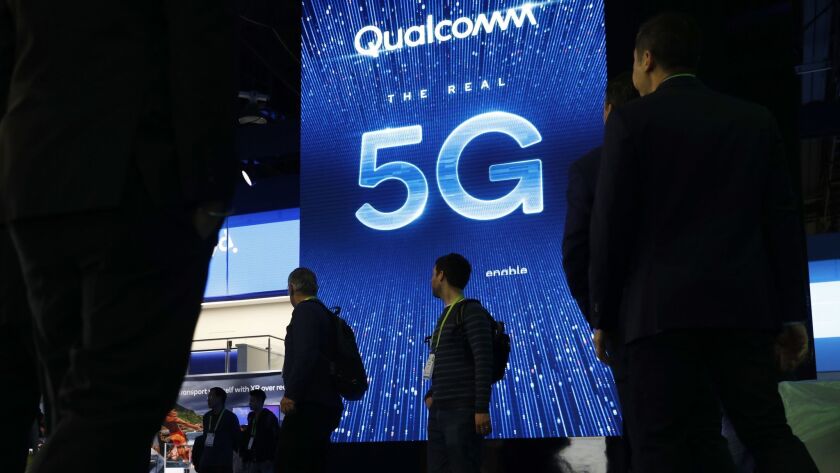 The X60 also increases network capacity and expands coverage. Networks operators will be able to double sub-6 peak speeds in standalone mode (that's where the phone goes straight to 5G instead of today's non-standalone networks, where 4G works as the anchor to make the initial handshake between a phone and a network before passing the device along to a 5G connection).

Qualcomm, the world's biggest mobile chipmaker, has led the push toward 5G. The company's modems are used in most high-end 5G phones on the market -- except those from Huawei, which designs its own chips -- and it has been expanding its processors to less-expensive devices. It's all with an aim to spread 5G across the globe as quickly as possible.

The company had planned to make the announcement of the X60 in conjunction with Mobile World Congress 2020, which was supposed to kick off with press events later this week in Barcelona. But coronavirus fears caused the conference organizers to cancel the show. The cancellation could cause some handset makers to delay the announcement of their devices that use Qualcomm's 5G chips.

The X60 is the Qualcomm's latest effort to make 5G more user friendly and help people see consistent, fast speeds. While 5G's peak speeds are impressive -- letting you do things like download PUBG Mobile in 2.5 minutes versus 6 minutes on 4G -- it's difficult to actually find steady connections. The lower band networks, like those favored by T-Mobile, provide broad 5G coverage, but the speeds have been similar to what's found in 4G.

That could change when the X60 hits the market. Qualcomm expects it to ship in devices early in 2021.

"You can deliver on the full promise ... of 5G," Qualcomm President Cristiano Amon said in an interview ahead of the news. "As you aggregate this ... you actually get coverage and speeds," Amon said.

5G significantly boosts the speed, coverage and responsiveness of wireless networks, running 10 to 100 times faster than a typical cellular connection today. It's the most significant advancement in mobile network technology since the introduction of 4G a decade ago, and it could have major implications for how we live. But up to now, a lot of those promises have been unfulfilled.

The next-generation networks are live in parts of the US and other countries around the globe, but they're not perfect. Coverage has been spotty, and it turns out that some varieties of 5G aren't actually that much faster than 4G. The few devices available last year were expensive, were tied to specific carriers and couldn't access all types of 5G. If you bought one of the 5G phones available in 2019, it won't be able to tap into the newer, broader 5G networks that AT&T and T-Mobile turned on late that year.

But 2020 should be the year 5G really takes off. The US carriers have aggressive plans to expand their networks, and each should offer more than a dozen 5G phones this year. Essentially, every phone maker in the world will have a 5G phone this year, including Apple.

As of early this year, over 45 operators have launched 5G service, and more than 40 handset makers have built devices, Qualcomm said. There are more than 275 devices announced or in development that use Qualcomm's 5G chips.

The company's X60 follows the X55 modem -- which will power most 5G phones this year, including Samsung's new Galaxy S20 lineup -- and the earlier X50, which could only connect to 5G networks (not 4G or any earlier technology) and appeared in the first 5G phones on the market.

Along with being able to aggregate different types of spectrum, the X60 modem is notable for another reason -- it's using the most advanced manufacturing technology currently available -- 5nm.

The building blocks of semiconductors are something called transistors. Making them steadily smaller brings improvements in power efficiency and speed, takes up less space in a device, and allows chip designers to add more capabilities to the processors. Qualcomm's previous modem was built using 7nm. To get some idea of just how tiny 5nm is, about 2,000 would fit end to end across the width of a human hair.

Samsung, one manufacturer that offers 5nm technology, said last year that chips using its manufacturing technology would get either a 10% speed boost or a 20% savings in power. Qualcomm hasn't said which company is manufacturing its new modems -- both Samsung and TSMC have moved to 5nm -- but it has worked with Samsung in the past.

Along with the new modem, Qualcomm unveiled faster, new mmwave modules that help maintain a connection to the super-fast but finicky mmwave version of 5G.

All cellular networks send data over the air, with standard networks using spectrum in lower-frequency bands like 700 megahertz. Generally, the higher the band or frequency, the higher the speed you can achieve. The promise of 5G is that it can use higher-frequency bands, called millimeter wave, to send data faster than ever before. Those signals operate on frequencies of 24GHz or higher, compared with the 600MHz to 5.8GHz used for 4G today.

Getting those ultrafast speeds using millimeter wave spectrum comes with some problems. The signal can travel only short ranges; it bounces off hard surfaces: and it has trouble moving around corners or past things like trees. Simply holding your hand over the antennas on the phone blocks the signal. The solution in phones has been modules that are placed around the edges of a phone. Typically, handset makers use three or four such modules. If one is blocked, the others will still receive the 5G signal.

"From a user perspective, an upgrade in the performance of the RF front end will translate into higher speeds at the end of the cell," Amon said. "You get better coverage than you would otherwise and improved battery life."