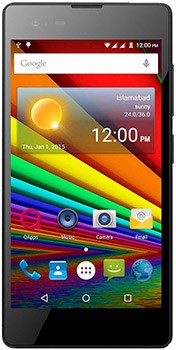 QMobile Titan X700i - The Ultra-Smart! QMobile unleashes stunning Titan X700i, a premium smartphone beast that is made by the company to satisfy your gaming and entertainment urge with its power packed top notch hardware. QMobile Titan X700i is an ultra compact smartphone, which boosts a stylish five inch High definition touch screen. Thanks to the high performance quad-core processor bundled with 2GB DDR3 RAM, QMobile Titan X700i's superior graphics will take you out of this world while playing games or watching movies and if you are working it'll maximizing the efficiency of performed tasks. QMobile Titan X supports simultaneous operation of two SIM cards so you don't need to carry a second phone. Open the gates of real pleasure by moving to a high-quality smartphone of current era. QMobile's Titan X700i is powered by cutting-edge Android 5.0 lollipop operating system so it can simultaneously handle a wide variety of applications opened in multiple windows. The size of internal memory on QMobile X700i is 16GB just like a TiTanic and yet it can be further expanded up to 32GB, thanks to the expandable microSD memory card slot. Your Karma of ensuring some exceptionally high-quality images, this QMobile Titan handset is locked and loaded with a 5.0 megapixel sensor on the back with autofocus and a powerful LED flash, the fascinating Camera story doesn't ends here as Titan's X700i also packs a 2.0 megapixel QMobiled front shooter for some mesmerizingly bold selfies that'll surely get huge number of likes on social media networks. Additionally this beast of the best AKA QMobiles Titan X700i boosts a variety of connectivity modules including Wi-Fi, WiFi hotspot, EDGE, GPRS, 3G, FM Radio and Bluetooth 4.0 that'll help you stay in touch. A-GPS system on Q Mobiles Titan X700i can also provide you with a quick search through satellite coordinates of any location and in case if your device gets missings you can find it using the Google map service. The Titanium build will give a new look to your personality.

What is exact price of QMobile Titan X700i?

The exact price of QMobile Titan X700i is PKR 9900/- from local trusted shops of Pakistan, however Human error is possible.