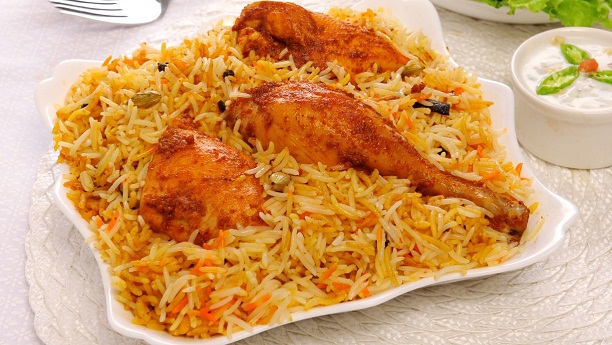 Biryani is basically a fusion of rice and curry in a layered style. The word ‘biryani’ comes from the Persian language which is an Urdu word that people use to make it. Biryani recipes have been diversified with time and the different styles have been developed to make Biryani. Regional people make it in their own way by using their key spices like Hyderabadi biryani, dum biryani, Lucknow biryani, Delhi biryani and others. 90% people will agree with me that every type of biryani is awesome in taste and have a unique aroma.

It’s a special dish that makes on special occasions, festivals, weddings, and home get-togethers. Daigh biryani has its own taste that everybody loves. In today’s recipe, we are going to share Pakistani Daigh style ‘chicken biryani recipe’ step by step that you eat in weddings. Normally the homemade biryani taste is little different but there are some ways that need to follow to create the unique ‘daigh taste’ in biryani. In my recipe video, you can follow the steps to make in your kitchen.

In South Asian recipes, biryani is the most popular and demanding food dish that people love and ready to eat anytime. People make it at home, special occasions and also a hot street food item in Pakistan, India, and Bangladesh.

Preparation of Chicken Korma for Biryani

Is biryani Pakistani or Indian?

What is the difference between chicken biryani and chicken dum biryani?

Chicken 65 biryani is slightly different from regular biryani. The biryani rice is dum (steamed) cooked with chicken 65 masala (spices) and other spices. The chicken is marinated separately.

Which Colour is used for biryani?